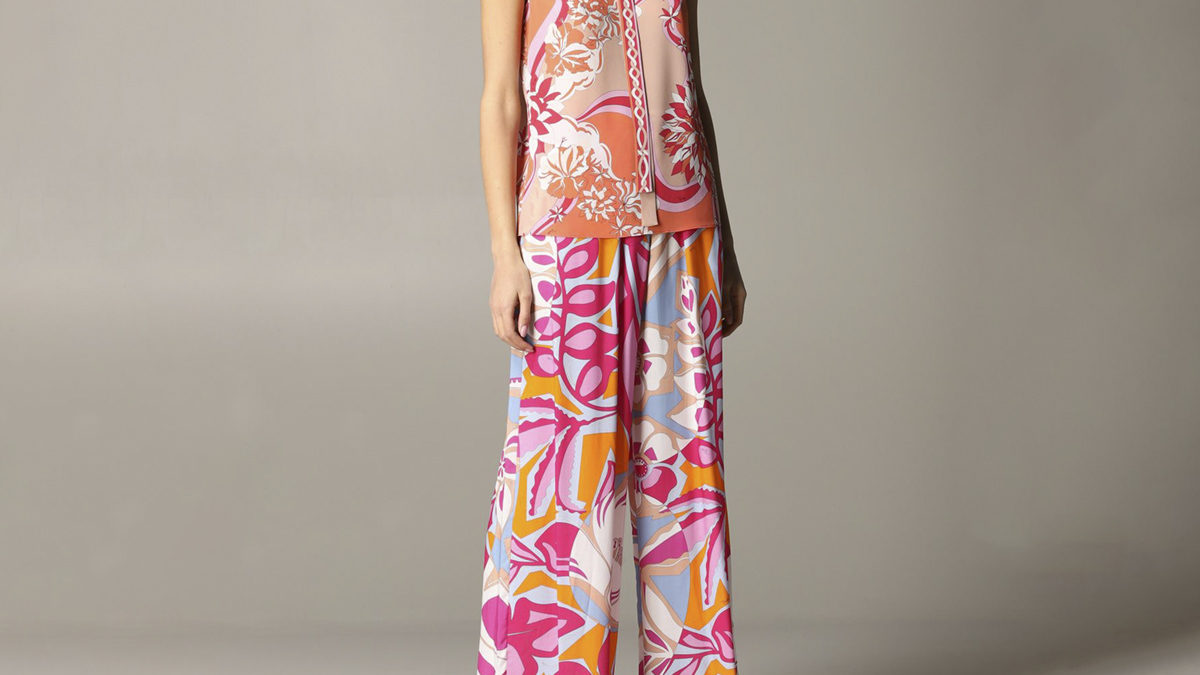 Among its many marvels, Italy boasts some of the most astounding, courageous and brilliant designers in the world. Offering celebrated fashion shows and glamorous boutiques from head to toe, and exceptional yearly happenings in Milan and Florence, the whole country is, and has indeed always been, an unrivaled haven of sublime fashion design. A designer that embodies a long line of Italian excellence is Laudomia Pucci.

Pucci, much more than a surname

Laudomia Pucci is the daughter of the late Emilio Pucci (1914-1992), grandiose fashion designer and creator of the world-celebrated Pucci brand. Born from his visionary talent in 1947, the flagship brand served as a fashion staple for the 50’s, and an example of sublime art and excellence worldwide designers have admired and looked up to for 7 decades.

In the 50’s, Pucci’s dazzling creativity lit up Italy’s runways, beckoning to stars, royalty and VIPs. The brand became synonymous with Italian splendor, epitomizing Italian values, such as femininity, outspoken attitudes and glamour, and the name “Pucci” became intrinsically tied with Florence and Italian excellence.

Emilio’s designs surpassed the boundaries of fashion: rather than staying in the safe zone of neutrals and solid colors, he led the way to modern fashion design by expanding his palette to include bright colors and ingenious prints.

Inventive and daring, Emilio Pucci brought luminescence, liveliness, luster and brilliance into his designs, creating clothes made to be worn joyfully and freely.

Today, Emilio Pucci designs are sold out of his own fashion houses that embody his unique design. Emilio Pucci and Rossignol Boutiques carry Pucci’s women’s clothing and accessories in their stores along with a small line of men’s clothing and accessories. Renowned for his uniquely swirling patterns, Pucci lives on in a legacy bound to forever fill the world with gaiety and originality forever.

Yet, surprisingly enough, Emilio Pucci’s career didn’t start in fashion. Initially in the Italian army, he worked as a ski instructor for extra money, and that was when his creativity came to be. Desirous to surprise, he started designing his own ski suits, made out of cutting-edge stretch fabric, and, on the slopes, caught the attention of an American lady who had taken a liking to Pucci’s designs. Clad in Emilio’s creation, the two were photographed by fashion photographer, Toni Frissell, and the photos ended up appearing in Harpar’s Bazaar USA.
From here, Pucci’s career took off and the rest is history.

The brand started out in the realm of luxury sportswear, but grew past this to embody all aspects of fashion. Pucci was entirely self-made. He hadn’t studied fashion, but rather naturally fell into it without a thought of if it’ll become a success. He relied on his background with Italian craftsmanship and let the rest unravel from there.

In 2000, the French LVMH luxury goods empire bought out much of Pucci’s designs, acquiring 67% of the Pucci namesake. Laudomia stuck by during this transition as the image director. However, her involvement with the brand began long before this.

Laudomia began working with her father on designs and learning the tricks of the trade in 1985. This prepared her well to take over major responsibilities of the label after Emilio Pucci’s death in 1992.

Laudomia was 28 at this time and determined to carry on her father’s legacy and brand. When LVMH acquired 67% of the brand, things started to take off for the Pucci brand once more. The brand ended up relocating from Florence to the fashion center of Milan in 2016.

Aiming to carry on her father’s legacy and preserve his designs, and share her knowledge of the fashion world with ambitious young talents, Laudomia daily endeavors to preserve, and enhance, the Pucci heritage.
Just as her father took risks, Laudomia allows ingenious young designers to experiment and practice, enabling them to find their very own personal path through the fashion world.

After all, the heiress loves to say, iconic designs don’t come to life if their creator’s mind is trapped in a box. To allow tomorrow’s talents to flourish, Laudomia created a talent center in her family’s estate, where students from various fashion schools – Polimoda in Florence, ECAL in Lausanne, and Central Saint Martins in London – gather to see past designs, learn about the Pucci legacy, and craft their own designs seeking creativity and perfection.

Passionate about novel ideas and leading-edge creations, Laudomia also firmly believes in preserving her father’s heritage, brand, and signature designs, as well as Italian excellence and cultural identity. That’s why she strives to maintain the quality, and superb manufactured perfection, that only hand-made garments crafted by skilled artisans can boast.

And so, blending the legacy and awareness of the past with future creativity and proficiency the Pucci name and brand thrive, blossom, and expand, endowing the future world with Italian talent, style and elegance.

A Commitment to Greatness

Harmoniously blending tradition, creativity and novelty the Pucci legacy and Italian excellence live on, thanks to Laudomia’s committment and her marvelous future-minded goals.