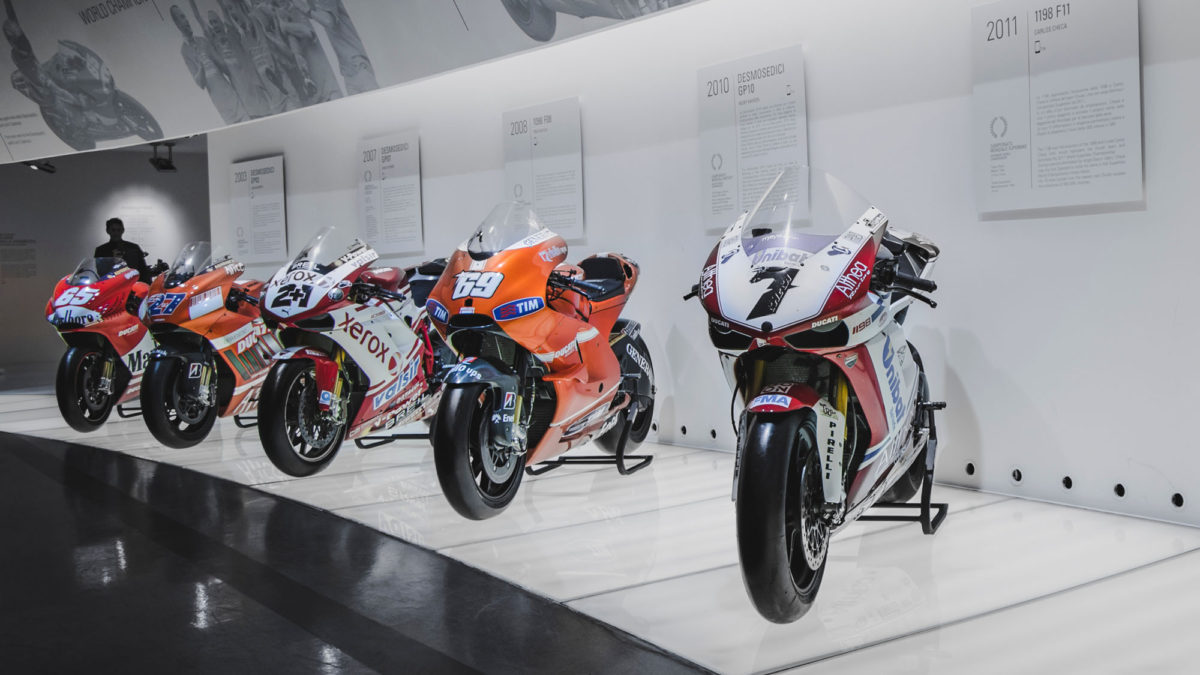 The Ducati Museum, a journey through 90 years of legendary motorcycles

Beloved by motorcycle enthusiasts for well over half a century, Ducati motorcycles set an unparalleled standard, and recount a wonderful Italian story. A tale made of talent, vision, passion and success.
Where and how to explore? The spectacular Ducati Museum offers the opportunity to discover the realm of these glossy dazzling meteors of speed. Located in the heart of the Motor Valley, that fertile area of Emilia Romagna bejeweled by Italy’s most exceptional motor companies, manufacturers and museums, the museum was entirely renewed in 2016, to celebrate the brand’s 90th anniversary. Today, superbly fashioned leading-edge premises provide an enlightening voyage through Ducati’s fascinating history, and an enriching insider’s view of the brand’s signature technological innovation. It also presents a fabulous overview of the thrilling competitions which have turned Ducati into a legend, and created its unsurpassable legacy of victories.

Visiting the Ducati Museum is a breathtaking experience for everyone, independently of one’s love for motors or interest in motorbikes. Dedicated to honoring the brand’s heritage and style, as well as its awesome performances, it enables all visitors to travel back in time and discover a gloriously Italian immortal saga of genius, talent, creative inventiveness and hard work.

On the other hand, motorcycle enthusiasts will no doubt revel in the privilege of actually breathing the Ducati passion, that uniquely distinctive craving for speed which led the company to become an icon of two-wheel racing.

When and how did it all start? Way back in 1924, when brilliant physics student Adriano Cavalieri Ducati, successfully connected Italy to the US via a short-wave radio he had built himself! Enthusiastic and hard working, he soon set up a family owned company called “Società Scientifica Radio Brevetti Ducati”, where he started working with his brothers Marcello and Bruno.

Originally located in Bologna, the factory moved to larger premises built especially in Borgo Panigale between 1935 and 1939. Capability, flair, skill and keen ingenuity brought the Ducati brothers to move on quickly. In no time they were making precision machinery, as well as radio devices. Heavily damaged by Allied bombing in 1944, the factory lay still, waiting for the war to finish, and the brothers, evidently, had time to conjure new ideas up. At the end of 1945 the factory was only partially back on its feet. Yet, in March 1946, the Ducati brothers started manufacturing “il Cucciolo”, the first motorcycle ever produced in the Borgo Panigale plant.

When Italy came back to life, following post-war reconstruction, a desire to move ahead, rejoice and produce spurred all areas of production and technological development. Lifestyle changed too, and the very first thing every Italian wanted was… to move, and fast!

The Ducati Cucciolo quickly became a sensation: new and uplifting it symbolized life, future and all that was good and positive of the new post-war era. The roaring 60s came on in a flash, and with them progress, rock ‘n’ roll, the man on the moon and Pop Art.
Meantime, Fabio Taglioni, Ducati’s most influential designer of all time, was creating his winning engines, at once beautiful and technically perfect. Ducati’s amazing history moved on ahead, along the tracks of time and peoples’ tastes and desires, into the ‘70s when motorcycles were for those wanting to explore and live “on the road”, and into the ‘80s, when supersport racing bikes grabbed the show.

Designed to provide an instructive and exhaustive viewpoint on the Ducati legacy the museum tells the brand’s story following three different carefully crafted narrative paths. Each of these route’s leads straight to the heartbeat of it all, the motorcycles, showcasing how the pieces on show are all exclusive, incredibly conceived, precious works of art.
Hence, visitors embark on a veritable journey along the museum’s three distinct thoroughfares: the Ducati Production Bikes Gallery, the Parade of Ducati Racing Bikes and the Ducati History at a Glance

The Ducati Production Bikes Gallery displays a stunning collection of the most significant Ducati motorcycles that, historically, exemplify and epitomize the company’s different eras, as well as world history, starting from 1946 onwards. The exhibit is nothing short of arresting: 15 sensational road bikes that portray our past, depicting and describing the social and cultural evolution occurred from 1946 until today. Completed by dazzling artistic installations, which boost one’s perspective and intensify the overall allure, the display recounts a mythical tale made up of shapes, colors, style, and achievements.

The Parade of Ducati Racing Bikes is the Museum’s route devised to illustrate Ducati’s striking racing history displaying the motorbikes that built the World Championship Ducati legend, alongside the riders’ trophies and outfits.
The Ducati History at a Glance narrative path reconstructs the brand’s enticing past relating its most momentous events, describing the leading characters and their ideas and successes, and offering an overview of the Ducati motorbikes distinctive technological features.
The Ducati Museum showcases 90 years of mythical motorcycles, victories, trophies and style. 90 years of legendary Italian excellence.