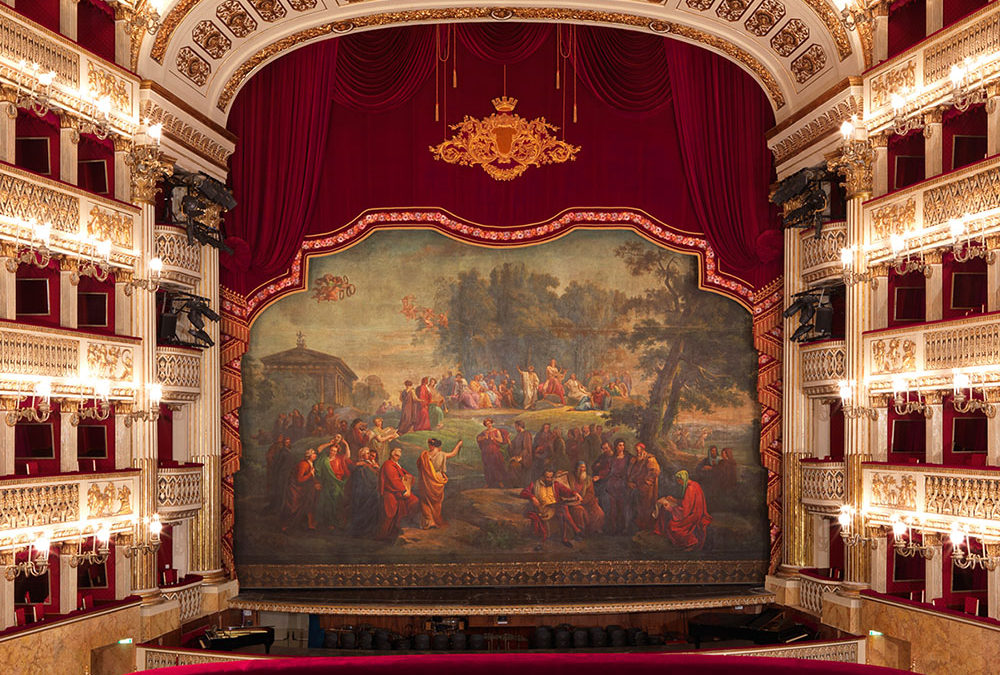 Magnificent, impressive and resonant with historic grandeur. If there’s anything good to remember about the house of Bourbon, it’s that King Charles III, the first of the dynasty to reign over Naples, was the one who decided to build the Teatro Reale di San Carlo (Royal Theatre of Saint Charles).
Naples’ superb lyrical theatre, today known simply as Teatro di San Carlo, is one of Italy’s crown jewels, a world-acclaimed temple of musical glory, and the most ancient continuously active opera house in the world.

Constructed 41 anni before La Scala Theatre and well before Venice’s la Fenice, the San Carlo never interrupted its performances except for a brief period (1874-1875), and set the scene for future opera houses all over the world as per design, dècor and artistic repertoire. Ask any Neapolitan: all other lyrical theatres followed its lead!

A first, quick glance at the building is enough to prove the local partisans right. The glorious facade, a melodious monument of Neoclassicism, is enhanced by garlands and heads on the lower level, bedecked by reliefs which refer to music and poetry on the upper, and finally crowned by a delicate portico of Ionic columns which seems to shelter the large windows. Simply superb.

Truth be told, the theatre’s regal beauty and countenance are equalled by its dazzling artistic heritage. An immensely rich legacy proven, among other things, by the antiquity of its celebrated ballet school – founded in 1812 – and the composers it attracted – among which Gioacchino Rossini, Giuseppe Verdi and Vincenzo Bellini.

The Teatro San Carlo’s fascinating, polychrome history adds shimmer to a glistening temple of harmony, and starts with why and how it came to life. Because of a king’s whim, as is often the case…

Charles III Bourbon’s desire was to “add marvel to magnificence”, by giving Naples a new theatre. A grander and larger venue, more suitable to the city’s and his kingdom’s prestige than the old, cramped Teatro San Bartolomeo. To make sure his new theatre imposing and sumptuous enough, Charles III commissioned the project to Spanish military architect Colonel Giovanni Antonio Medrano. Hence, Medrano created the design, while architect Angelo Carasale, who had formerly renovated the Teatro San Bartolomeo, oversaw the construction and decoration.

In compliance with the king’s demand building started immediately, in early 1731, and the grandiose work of architecture was inaugurated on November 4th 1737, the king’s name day. On the night, candlelight flickered throughout, lighting the sumptuous blue upholstery, elaborate furnishings and gold decoration. Medrano’s design – a 28.6 x 22.5 mt hall, 184 boxes distributed through six tiers and a royal box for ten people – perfected by Carasale’s sumptuous choice of furnishings and palatial dècor made for an incredibly luxuriant venue.
And an unprecedented one too: a total amount of 1379 seats plus standing space made the Teatro San Carlo able to host 3.300 persons at once. It was the largest lyrical theatre in the world, and its exceptionally superb acoustics rapidly turned it into every artist’s, composer’s and director’s dream.

In the 18th century it welcomed Christoph Willibald Gluck, and Johann Christian Bach, attracted Händel and Haydn, and captured the fancy of young Mozart. Vienna’s enfant prodige was so bewitched by the allure of Naples, the city which “sings and enchants” as he himself remarked, that he set the scene of the first act of his Così Fan Tutte in a Neapolitan café!

The Theatre had staged unforgettable performances and showcased great talents for over 60 years when a fire destroyed a large part of it on the night of February 13th 1816. The only parts of the building to survive were the outside masonry walls, but restoration, handled by Tuscan architect Antonio Niccolini, was quick, and spectacular. In a mere nine months Niccolini re-built the Hall following the original design, and keeping the horseshoe shape of the boxes and proscenium configuration intact. Finally, he added value with the splendid bas-relief clock depicting the “Time and the Hours” which spectators can still admire today. Other beautifying additions included the ceiling painting by Antonio, Giuseppe and Giovanni Cammarano, and the stage curtain.

Once restoration was complete the Teatro San Carlo lit up once more, and thrived through the 19th and into the mid 20th century, hosting a plethora of world class artists, composers and dancers. Among these, soloists like Paganini, Sphor, Benedetti Michelangeli and Accardo. Composers like Bellini, Donizetti, Mercadante, and Puccini. Exquisite voices, such as Renata Tebaldi and Maria Callas. And peerless dancers, like Carla Fracci, Vassiliev and Maxinova, Rudolf Nureyev and contemporary dance virtuosos.

Its unique harmonious blend of beauty, architectural grandeur and cultural eminence makes the Teatro San Carlo an exemplary symbol of Italy’s artistic legacy, heritage and history. And of its people’s courage, too, considering that neither the terrible fire of 1816 nor World War 2 air raids, which damaged it terribly, stopped this dazzling theatre from staging performances. Excellently restored in 2010 Naples’ Teatro San Carlo continues on its 300-years-old mission to fill the world with music, and people’s lives with marvel, passion and magic.